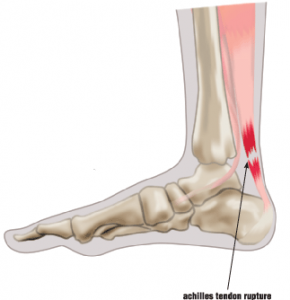 If you feel a sudden pain at the back of your ankle, followed by an inability to move your foot normally, you may have ruptured your Achilles tendon. This tendon connects the calf muscles to the heel bone, and it is instrumental in allowing you to walk, run, and stand on your toes.

The Achilles tendon is most susceptible to rupture in people who take up exercise without proper conditioning, especially in sports that involve sudden starts and stops, such as tennis or basketball. The left leg tends to be affected more often than the right, probably because most right-handed people push off with the left leg during sports. Aging and lack of exercise both contribute to weakening of the tendon, which makes it more prone to injury. Ruptures are most common among men between the ages of 30 and 50.

Long-term inflammation of the tendon can also lead to rupture, and tight or weak calf muscles raise the risk. Other causes of rupture include running on hills or hard surfaces, and wearing shoes that don’t fit properly. Steroids, especially if injected directly into the tendon, are associated with an increased probability of Achilles tendon rupture. The use of fluoroquinolone antibiotics also raises the risk.

Treatment of a complete rupture usually includes surgery to repair the tendon, followed by wearing a cast, a splint or a walking boot. A partial rupture can often be treated without surgery. For all ruptures, patients should receive physical therapy, which will strengthen the leg muscles and the tendon, increase flexibility and restore full range of motion.